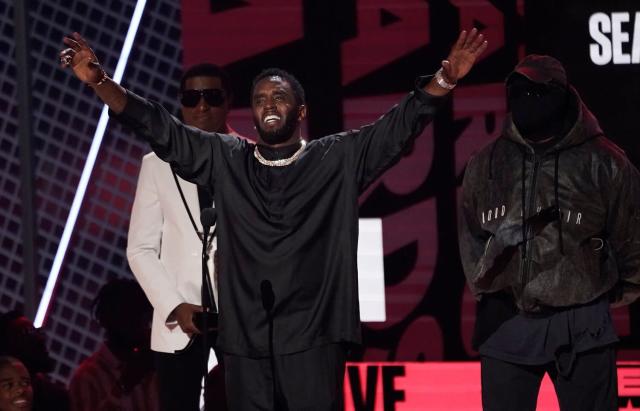 Diddy gave a shoutout to his ex-girlfriend, Cassie, while accepting the Lifetime Achievement Award at the BET Awards on Sunday.

Diddy thanked his ex-girlfriend, Cassie, for being there for him during the “dark times” of his life while accepting the BET Lifetime Achievement Award on Sunday night. Diddy’s current girlfriend, Yung Miami, was watching on from the audience while holding up a sign reading,  “GO PAPI!””I just miss Kim y’all,” Diddy admitted during his speech, referring to Kim Porter. “Stay connected to God, and he’ll bring you out. I just want to say thank you to Kim.”

“I was in a dark place for a few years. I have to give a special shoutout, thank you, love, to the people that was really there for me,” he said. “And also Cassie, for holding me down in the dark times, love.”

Before his speech, the network played an old video of Porter congratulating Diddy. In the clip, Porter says, “Congratulations, Puffy, you’re a star. I can’t tell you how proud I am. From Harlem to Hollywood, that’s a long journey … You work so hard, and I’ve watched you, your blood sweat and tears, and you’ve arrived.”

Miami’s City Girls partner, JT, could be seen nudging Miami to sit down during the segment of the speech. Diddy and Miami were first seen together at Quality Control CEO Pierre “Pee” Thomas’ birthday party last June. Diddy only recently confirmed that they were dating, but added that he’s single at the same time.

When the video of Miami’s reaction to the speech began spreading online, she tweeted out, “Girl please!” and reaffirmed, “GO PAPI!”

Check out Diddy’s full acceptance speech below as well as Yung Miami’s response.

Jussie Smollett ‘will not be returning’ to ‘Empire,’ show co-creator Lee Daniels says