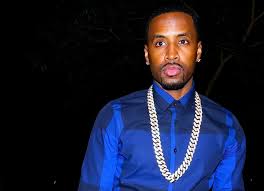 ROBBED AT GUNPOINT!Safaree robbery that ended with him running for his life was all caught on surveillance video.

In the video obtained by TMZ,  Safaree was next to his vehicle in a parking garage in a red fur coat. The video shows 2 men who appear to be lying in wait run up on Safaree and his friend with guns drawn.

The suspected robbers were captured after the robbery. The video also shows the robbers going through Safaree’s coat, taking cash and valuables, before making him and his friend get on the ground.

Safaree and his friend get up and take off, after the robbers leave.

Safaree told cops he was robbed of around $183,000 of cash and jewelry.

TMZ has more on the story. Click video below.

TOYKO TONI IS ON A QUEST TO DESTROY HER DAUGHTER FOR REAL, FOR REAL ! (RECEIPTS)