{DEM 404 BOYZ} Texas Woman Gets Life in Prison in Beheading of Daughter!!! 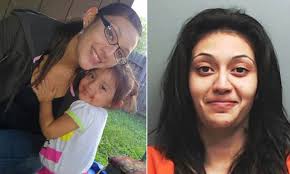 Authorities have filed capital murder charges against a woman they say stabbed and mutilated her 5-year-old daughter Thursday (3.5.20) at a Kyle home in what Hays County Sheriff Gary Cutler called “one of the most horrific cases in the history of Hays County.”

Krystle Concepcion Villanueva, 24, was also charged with aggravated assault with a deadly weapon after Hays County deputies said she attacked her 58-year-old father-in-law.

Cutler said officers would take quite some time to work through the scene at the residence on the 200 block of Willow Terrace, where officers found Villanueva’s daughter, Giovanna Larae Hernandez, killed.

“I’ve been in this line of work for over 43 years — 11 years as a homicide detective,” Cutler said. “This is one of the worst cases I’ve ever seen and been a part of. … It’s very sad.”

Officers and medics were called to the home after Villanueva’s father-in-law Eustorgio Arellano-Uresti called 911 at 12:51 p.m. on Thursday. Arellano-Uresti had multiple stab wounds on his forehead, back and left shoulder, an arrest affidavit said.

Arellano-Uresti told responding officers that earlier that day he had seen Villanueva, who had been living at the residence for a short time, retrieve a 10-inch long knife from the kitchen and go into a bedroom. Arellano-Uresti said he could hear the girl crying from the bedroom.

Villanueva, 24, then returned into the kitchen and began stabbing him in the back. He turned toward Villanueva and tried to take the knife from her, but she stabbed him in the forehead, Arellano-Uresti said.

Police first arrived at 1:04 p.m. and learned that a shotgun was in the home. The SWAT team was called, and police didn’t enter the home until 2 p.m., Cutler said.

Inside, they found Villanueva naked after apparently just having taken a shower, the affidavit said. She was detained and removed from the home.

The SWAT team then found Hernandez dead in a bedroom, the affidavit said.

Arellano-Uresti was treated and has been released, Cutler said.

According to the affidavit, a sergeant at the sheriff’s office spoke with Villanueva’s sister, who indicated that Villanueva has a history of drug use and that, while in treatment in late 2015 for substance abuse, she was diagnosed with bipolar disorder, schizophrenia and attention deficit hyperactivity disorder.

Villanueva was charged with misdemeanor assault in 2013 after she was accused of striking Hernandez’s father in the face. The charge was later dismissed, court records showed.

On Friday, most of Willow Terrace remained closed as police continued to analyze the crime scene.

“It’s quite a crime scene,” Cutler said. “We’ll be there tonight, and we’ve been there for 24 hours.”

THIS ATLANTA HOTEL WAS NOT PLEASED WITH DAVE EAST…READ HERE