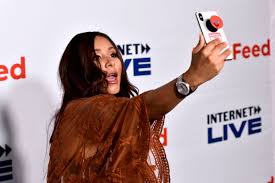 The reality TV star announced she’s “retiring” from “Jersey Shore” on the latest episode of her podcast, which dropped Friday morning. More details inside…

The 32-year-old opened up about her departure during the podcast “It’s Happening with Snooki & Joey,” explaining that while she “can’t believe [she’s] saying this,” her choice to step away from the MTV show is “what is best for [her] at the moment.” Snooki added, “I love you so much, and don’t hate me for my decision,” she said.

“I am retiring from Jersey Shore. I am not coming back to Jersey Shore for season 4 if there is one.”

She admitted that “the main reason is really … I just can’t do it anymore. Literally, leaving my kids to film it is really, really hard on me,” Snooki also said that the show, which originally premiered in 2009, has “been very drama” and “so serious,” and it’s becoming too much for her. The mom of two also revealed that she and her children have been receiving “death threats,” making her experience “just a lot and not something I signed up for with this show.”

Polizzi said she has an issue with how she’s been portrayed in the series. She also said there’s been a lot of drama on the show lately instead of it being a “light-hearted” experience.

“Our show, Jersey Shore, is about family and about making fun of each other and having a good time and laughing, and just knowing that it’s all in good fun,” she said. “And lately, it’s just like, everything is so serious, and when it comes to our show it’s not about like, team this, team that, and fans are against one another when it comes to a cast member. That’s just not how the show works and that’s how it’s becoming.”

Snooki starred in all six seasons of the original Jersey Shore, all four seasons of spinoff Snookie & JWoww and three seasons of Jersey Shore: Family Vacation, which will return to MTV in 2020.

Will you miss Snooki?

Even though White House officials say Trump’s suggestion of injecting disinfectant as a possible way to treat coronavirus patients was taken out of context, that didn’t stop ...