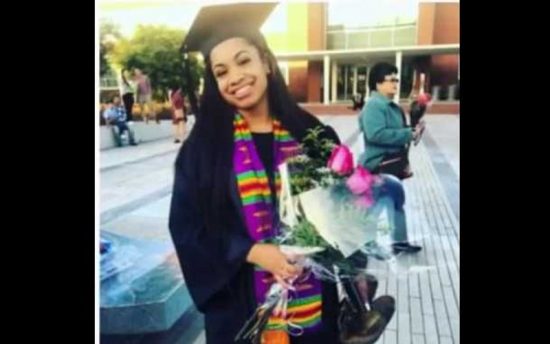 VICTIMS BOYFRIEND IS LISTED IN CRITICAL, BUT STABLE CONDITION… DETAILS INSIDE!

Police are investigating the shooting death of a Clark Atlanta University student outside of a Sandy Springs condo.

Cierra Ford, 25, was with her boyfriend when she was shot Friday along the 100 block of North River Drive.

Boyfriend Tyrique Lobban, 21, was taken to the North Fulton Hospital with multiple gunshot wounds and is listed in critical, but stable condition. Robbery is thought to be a motive in the shooting.

According to channel 2 news, Ford’s family said “she was majoring in communications at Clark Atlanta University and wanted to cover issues concerning African-Americans, including gun violence.” She had already earned an associate’s degree at Contra Costa Community College in San Pablo, California and was completing her Bachelors at CAU.

“She cared about the issues that plague our community such as gun violence, incarceration, said her brother, Clarence Ford.”

A GoFundMe page was created to raise funds for Cierra Ford’s funeral. More than $12,000 was raised by 10 p.m. Wednesday.

The rap mogul had already been in contact with Rob before his death to offer to pay for medical costs, but it was too late. ...