{MIDDAYS WITH JAZZY MCBEE} WHY DID 50 PULL OUT OF CHRIS BROWN’S “THE PARTY TOUR?”! 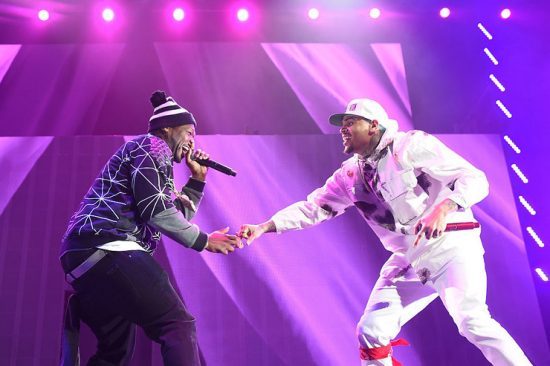 DESPITE RUMORS SWIRLING AROUND SOCIAL MEDIA, 50 SAYS IT AIN’T ABOUT MONEY… DETAILS INSIDE!

I would never say my friends can't afford me. This run wasn't handled correctly, I'm still on set filming Den of Thieves. #effenvodka

50 Cent made news this week when he decided not to be the opening act for R&B crooner Chris Brown, who is currently on tour.

The rapper said he pulled out because Brown’s tour “wasn’t handled correctly”, and he is currently still filming Den of Theives.

It was reported that 50 Cent, real name Curtis Jackson, left the tour because of a dispute over money. According to the site, both parties had agreed on his fee for the gig so executives at Live Nation, the company organizing the shows, reportedly assumed he was on board and began promoting his appearance.

However, when it came to signing the contract, the rapper and Live Nation were “hundreds of thousands of dollars apart” on terms and attempts to negotiate fell through and he walked away. 50 Cent denies these allegations.

Beyoncé’s “Renaissance” Debuts At No.1 On Billboard 200

Beyoncé’s “Renaissance” has debuted on top of the Billboard 200 albums chart, making her the first woman to do so in 2022. Beyoncé’s new album Renaissance has ...