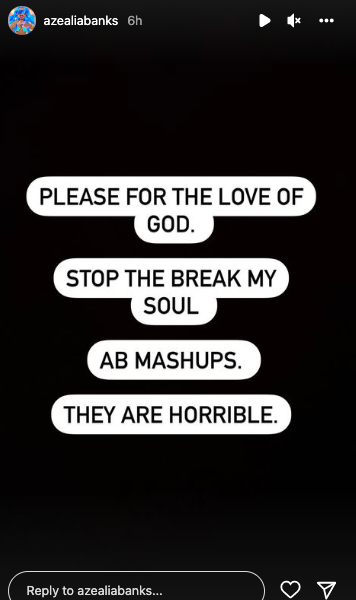 Azealia Banks frequently ruffles feathers and faces backlash for some of her takes on current affairs but she’s an undeniably talented figure. The Harlem rapper pushes the boundaries creatively, even before it proliferates through mainstream outlets. Over the past few days, Banks became a trending topic following the release of Drake‘s dance album Honestly, Nevermind and Beyoncé’s new single, “Break My Soul.” Fans have been giving their flowers to her and giving her the recognition she deserves. Some fans have gone ahead with creating unofficial mash-ups between Beyoncé’s latest record and a few records from Banks’ catalog. One remix that’s popped up is a mash-up between “Break My Soul” and “Fuck Him All Night,” but it doesn’t seem like Azealia isn’t necessarily fond of it. The rapper hit her Instagram Story this morning where she requested that fans put a halt to these remixes. She went as far as describing them as “horrible.”

“Please for the love of God. Stop the Break My Soul AB mashups,” she wrote. “They are horrible.”

Does Azealia Banks get her just dues? Check out Azealia Banks’ post below and sound off with your thoughts in the comments. 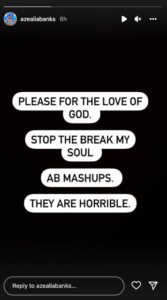 Young Thug is the only artist to have three projects debut in the top 5 on the Rap Albums charts: “JEFFERY”, “Slime Season 3”, and ...