Georgia voters race to the polls for primary election in governor, Congressional races 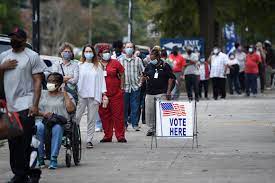 Election Day for the 2022 Georgia primaries is officially here and all eyes are once again on the Peach State with marquee races for governor and Congressional seats.

Polls for in-person voting open at 7 a.m. Tuesday morning. Most polls will close at 7 p.m. however some will stay open late if issues arise.

Fulton County Elections Board have already announced at least locations will be open late. Hopewell Middle School in Milton and Creel Park in South Fulton precincts will stay open late. Voters have a choice to select the Republican, Democratic or non-partisan ballot. You can view your sample ballot, find your polling place, or verify that you’re properly registered to vote by logging onto the Secretary of State’s My Voter Page.

WHO’S ON THE BALLOT?

Those choosing a Republican ballot have arguably the two biggest primary races to decide: the GOP gubernatorial and senatorial candidates.

Several Republicans are squaring off with one another for the GOP nomination to try and unseat Senator Rev. Raphael Warnock this November. UGA football legend Herschel Walker and Georgia Agriculture Commissioner Gary Black are among those vying for the nomination. Other Republicans appearing on the ballot include former State Representative Josh Clark, Kelvin King, Jon McColumn and Latham Saddler.

Another race to watch is for the Secretary of State’s Office. Incumbent Brad Raffensperger is running on the GOP ticket against U.S. Rep. Jody Hice, former Alpharetta Mayor David Belle Isle and former probate and magistrate judge T.J. Hudson, who have all criticized Raffensperger’s handling of the 2020 election.

On Election Day, you must vote at your designated polling place. Polling places are open on Election Day from 7:00 a.m. to 7:00 p.m. If you are in line by 7:00 p.m., you are allowed to cast your ballot.

If you plan on voting in-person, you will be required to show a form of ID. If you don’t have an ID or forget to bring it with you, you’ll be given a provisional ballot and will have a short grace period to provide the County Board of Registrars with an ID so your vote can be counted.

If you require special assistance to vote or to access your polling place, contact your County Board of Registrar’s Office for help.

Bobby Shmurda Discusses How Going Independent Has Changed His Career

Bobby Shmurda says that he’s already making more money than ever after going independent. Bobby Shmurda reflected on the ways in which his career has changed ...