LIVE UPDATES: Snow, wintery mix to continue through this evening 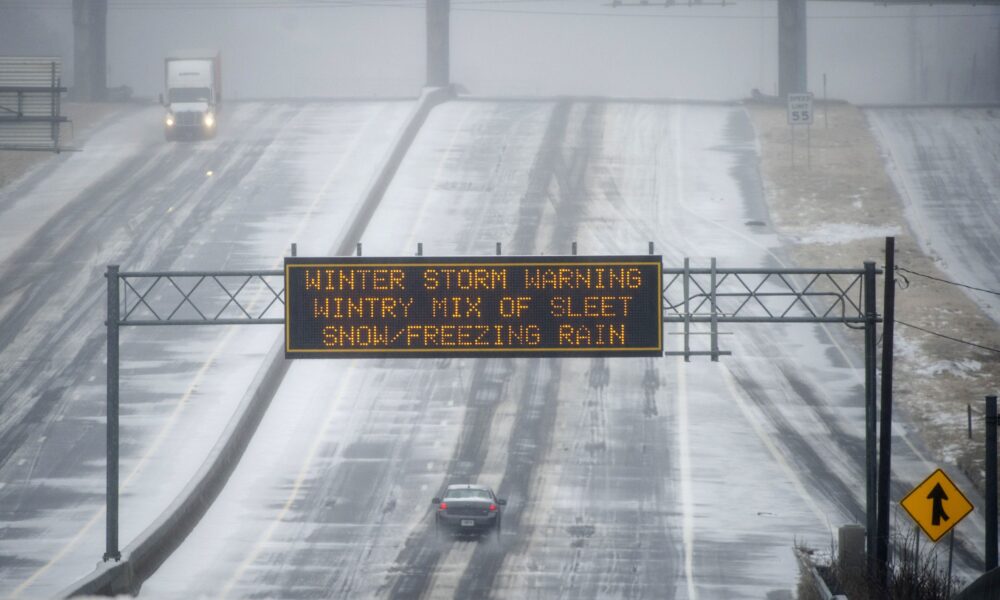 Snow has moved into metro Atlanta after blanketing northeast Georgia with several inches this morning.

Severe Weather Team 2 has been tracking the system as it began to move throughout the night and early hours Sunday morning. A wintery mix will continue through the evening hours in metro Atlanta.

High winds that knocked down trees and power lines across north Georgia will taper down in the next few hours.

LIVE Severe Weather Team 2 coverage as we track the wintry mix in your neighborhood and show you looks at the roads, on Channel 2 Action News.

Severe Weather Team 2 Chief Meteorologist Glenn Burns said temperatures are dropping and patchy ice will become more likely on roads in metro Atlanta. Drivers are urged to use caution and you should only travel if it is absolutely necessary.

Wet or slushy roads from snow and melted snow could refreeze overnight, particularly on elevated surfaces like bridges and overpasses.

Gwinnett County Public Schools have announced that all athletic events scheduled for Monday are cancelled.

Temperatures on the roads are now at or near freezing in metro Atlanta. You can expect black ice on bridges and untreated roads.

Another round of snow is making its way inside the perimeter.

GDOT wants to remind people to be extra careful if they have to go out tonight.

Georgia’s electric membership cooperatives (EMCs) are reporting approximately 19,500 customers without power as a result of high winds, snow and sleet blanketing much of north central and northeast Georgia.

Gov. Brian Kemp is urging Georgians impacted by today’s weather to stay in and off the roads:

GSP is warning of icy conditions near GA 400 North at Lenox Road.

Atlanta-Fulton County Emergency Management says it is starting to see some accidents from slippery conditions on the roadways.

Atlanta-Fulton County Emergency Management reports that there is some snow accumulation on roads and bridges, which means the potential for black ice is increasing.

Snow is starting to accumulate in Midtown at WSB-TV HQ!

As of now, there have been 43 reports of trees and power lines down in Fulton County alone, according to the emergency manager.

Roads are slick in Athens-Clarke County.

Georgia Power said it has restored power to over 41,000 customers statewide, while a remaining 48,000 remain without power as of 11 a.m.

Snow in metro Atlanta will continue into the evening hours. Here’s a timeline:

A down powerline has all lanes blocked in both directions on SR 279 at Pleasant Hill Rd. Use extreme caution if in this area and seek alternate routes.

The following roads are currently blocked in Sandy Springs: Spalding Drive at Dunvegan (telephone pole down) and Kitty Hawk Drive at Long Island Drive (tree down).

It’s snowing in Midtown! Here’s the view from the WSB-TV headquarters:

The Governor’s Office of Highway Safety is advising people to stay off the roads as trees and power lines are beginning to fall across metro Atlanta.

Temperatures on the roads are also starting to drop, creating the possibility of black ice.

A fallen tree is blocking the road and causing power outages in East Point:

The Winter Weather Advisory has been expanded to include Troup, Henry, Spalding, Pike, Meriwether, Fayette, Coweta and Clayton counties.

What you need to know today:

Severe Weather Team 2 Meteorologist Eboni Deon says to make sure to charge all of your devices as winds will continue to pick up.

Georgia Power and Georgia EMCs are already seeing thousands without power, mainly in the northeast counties.

WSB-TV viewers in Rabun, Hall, White and Gwinnett counties have sent in videos of snow falling in their neighborhoods.

MAN SLAPS HIS ATTORNEY AFTER GETTING 30 YEAR SENTENCE!!!!