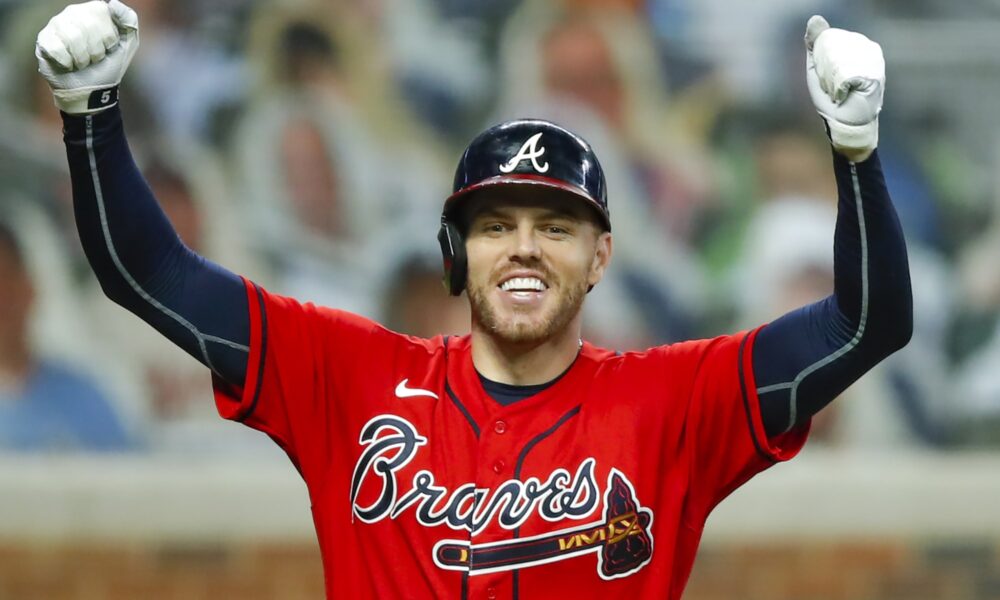 MV-Free has done it again.

With the game tied in the eighth inning, Freddie Freeman sent a solo shot flying into center left field to give the Braves a 5-4 win over the Milwaukee Brewers.

Will Smith picked up the save. The Braves are now heading to the National League Championship Series for the second straight year.

“I’ve had a lot of cool moments in my career. So far, I think that’s going to top them,” Freeman said. “Hopefully that’s not the last one cool one and I have a couple more in these playoffs.”

With the game tied in the 8th, Milwaukee turned to one of the best relievers in the game Josh Hader.

He struck out Eddie Rosario and Dansby Swanson, but Freeman came through in the clutch for the Braves with a 428-foot bomb.

Hader has only given up eight home runs to lefty hitters. Freeman now has two of those eight.

“It was the perfect ending. I don’t know if I ever have been involved in a game like that. It was something else,” Braves manager Brian Snitker said. “The fans were amazing today. I always praise them but Braves country came out strong that’s for sure.”

Game 1 and Game 2 of the NLCS are set for Saturday and Sunday. Atlanta will face the winner of the Los Angeles Dodgers and San Francisco Giants.

Morton went 3.1 innings pitched and struck out five batters. After Morton put two runners on base and was pulled, the Brewers struck first in the top of the fourth to take a 2-0 lead.

While there was a controversial infield play in foul territory in the bottom of the inning, the Braves loaded the bases.

An Atlanta pitch hitter came through once again as Rosario’s single scored two runs to tie the game, 2-2.

The Brewers tacked on another two runs behind Rowdy Tellez’ deep blast to center field off Huascar Ynoa. That was Tellez’ second 2-run home run of the series.

In the bottom of the fifth, the Braves once again tied up the game with a fielder’s choice from Joc Pederson and a single by Travis d’Arnaud.

A.J. Minter, Luke Jackson and Tyler Matzek pitched solid innings in relief to keep the Brewers off the board through the eighth.

After Freeman’s home run, Smith entered the game. The Brewers had a man at first but Smith struck out the side to end the game.

“They did an unbelievable job as they have been. Luke wanted to go back out if we didn’t hit for him. He wanted the ball in the eighth. They all stick their head in the door ready to go. It’s a great group,” Snitker said.