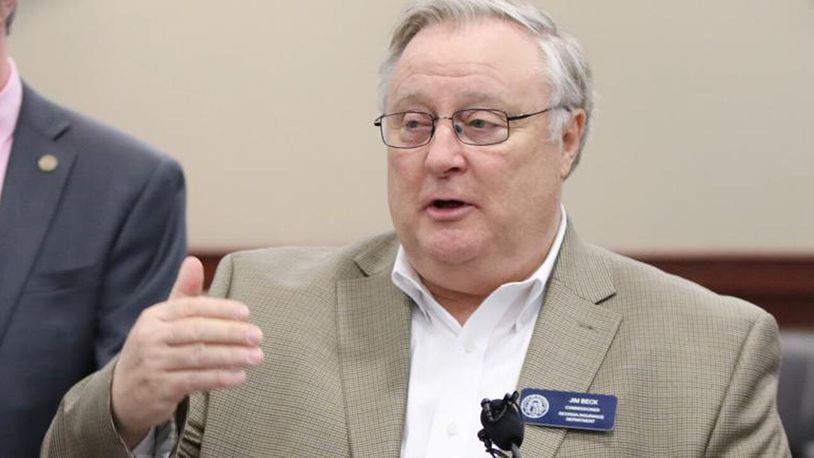 A jury convicted Beck earlier this year of fraud and stealing more than $2 million from a former employer.

Authorities said Beck used the money to fund his election campaign and pay his credit card bills and his taxes.

It is less than the 10 years federal prosecutors originally aimed more, but more than the five years Beck’s lawyers argued was enough.

Cohen also ordered Beck to pay $2.6 million in restitution and to serve three years of supervised release after he gets out of prison. Beck, 60, remains free on bail and is likely to report to prison in December.

“I hope that I have made life better more than I’ve hurt people,” Beck said. “I do know that I have actively damaged precious relationships and I pray for restoration.”

The GUA was designed to provide Georgia homeowners with high-risk property insurance.

“The evidence makes completely clear that Jim Beck … is a thief,” Assistant U.S. Attorney Brent Gray had said at trial. “He is an ordinary, plain, fast talking — and rich — fraudster.”

Beck took the stand in his defense during the trial. He had testified that subcontractors he controlled provided valuable data that helped GUA increase its profits.

However, prosecutors argued the companies did little real work.

The trial lasted only 9 days and it took the jury only a few hours to find Beck guilty on all 37 counts of fraud.

“I’m completely and totally responsible, and again, I accept the jury’s verdict,” Beck said Tuesday before the judge sentenced him.

Of the restitution, $2.26 million will go to Cincinnati Insurance Co., which repaid Georgia Underwriting Association for its losses. The remaining $358,000 will go to the IRS to repay for Beck’s tax evasion.

Cohen on Friday ordered Beck to forfeit more than $2 million, including $426,000 held in various accounts and two pieces of property worth almost $200,000. That money may be applied to the restitution he owes.

DO WE HEAR WEDDING BELLS??