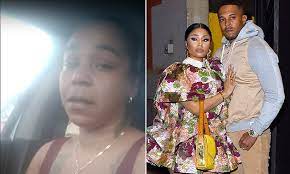 Jennifer Hough spoke about Kenneth Petty’s alleged sexual assault on a new episode of “The Real.”

The details of Kenneth Petty’s first-degree rape case against Jennifer Hough in 1994 are very disturbing, and his alleged victim has recently been forced to re-live her trauma, suing Petty and his wife, Nicki Minaj, for harassment. At the time of the alleged sexual assault, Hough and Petty were both sixteen. Petty ended up doing time for this case, but it remains a pivotal part of Jennifer Hough’s life.She recently filed a lawsuit against the world-famous rapper and her husband, Hough’s alleged rapist, claiming that they have been harassing her and her family. This week, Hough is set to appear on an episode of The Real, where she will speak about what she allegedly experienced at the hands of Kenneth Petty. Flanked by her lawyer, she recalled the incident that Petty was forced to register as a sex offender because of.

“With regards to this whole situation, [it] put me in a whole different type of fear at my age. It was wrong and I don’t want to be afraid anymore,” said Jennifer Hough during her first on-camera interview. “The only way not to be afraid is to continue to speak up.”

Kenneth Petty initially denied the first-degree rape charges before later pleading guilty to attempted rape. He spent over four years in jail, but Hough never thought about justice, and if it had been served.

As for her thoughts about Petty marrying Nicki Minaj, Hough says that she was afraid what happened to her would be amplified, and her fears were very much valid.

Hough also says that she spoke with Nicki Minaj directly in March of last year. Nicki allegedly had gotten word that Hough was willing to help her and Petty with a specific situation, and Nicki even offered to fly out Hough’s family to Los Angeles. She turned down the offer and told Nicki, “Woman to woman, this really happened. And I haven’t spoken to her since. Them sending people to negotiate numbers as far as money is concerned with family members, and Nicki is the one that personally reached out to me. In regards to helping her, helping them and this situation. And then the threats that I received… the last text that I received was about how I should have taken the money because they’re going to use the money to put on my head.”

Watch parts of Jennifer Hough’s interview on The Real below, and stay tuned for the full episode.

A post shared by The Neighborhood Talk, LLC (@theneighborhoodtalk)

No bond for suspect accused of pushing woman from Lamborghini, killing her

Police said the man accused of pushing a woman out of a Lamborghini, who later died, has turned himself in to police. The incident happened ...