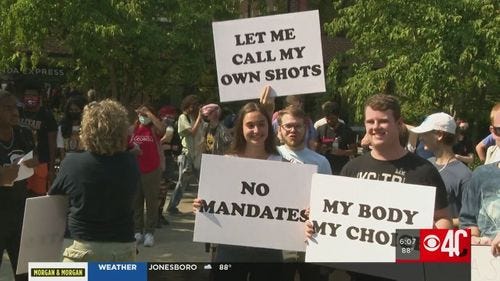 Professors at University of Georgia walked out of classes Monday to protest for the right to mandate masks in their classrooms.

The 20 colleges and universities under the University System of Georgia are prohibited from making students wear a face masks.

Georgia House Democrats serving on the Higher Education committee held a press conference Monday afternoon calling on Governor Kemp and the Board of Regents to lift the ban on mask mandates in Georgia’s state colleges.

“The USG policy of prohibiting universities or faculty to require masks in indoor space effectively castrates the ability for students, faculty, and universities to do what it takes to protect themselves,” said State Rep. Dr. Jasmine Clark who is a scientist and a professor at Emory University where she says she is allowed to require masks and vaccines in her classroom.

“Remove the stranglehold from our universities,” Clark announced addressing Gov. Brian Kemp in the press conference. “Let them make decisions that are best for their community for their campus for their students for their faculty. Take yourself the handcuffs off. We are losing good faculty not just to resignation but also to sickness and to death.”

The House Democrats were cheered on by a group of Cobb County parents who brought posters and signs to demonstrate in support of mask mandates in all schools.

On Georgia State University’s campus students told CBS46 they wear masks for the most part but some students do not.

“On campus, the teachers you go in and they say you’re not required to but that we would heavily prefer that you would,” said sophomore student Brooke Burns.

“Most people comply. Some people don’t, but they don’t complain or anything. We just kind of sit away from them. I know I do. I don’t sit next to someone who doesn’t have a mask on,” Burns explained, adding that she believes it is selfish not to wear a mask and wants a mandate in place.

Michael Dinh, a senior at Georgia State, says he believes students should respect the wishes of professors who are concerned about COVID.

“I don’t think they can force anything on students, but I think if they want to make the environment safer for themselves and other people who want to have masks then I think they should have the power to do that,” Dinh told CBS46.

Some professors have reported they’ve been reprimanded for trying to require masks in class. One UGA professor quit after a student refused to properly wear a face mask in his class.

Gov. Kemp’s office tells CBS46 he is standing by his stance that mask mandates are divisive and not necessary.

The Georgia Board of Regents did not respond to CBS46’s request for comments on this story.

Rep. Clark says the board has not responded to her group’s requests for meetings so they will be requesting formal legislative hearings this fall to address COVID concerns in Georgia’s colleges.