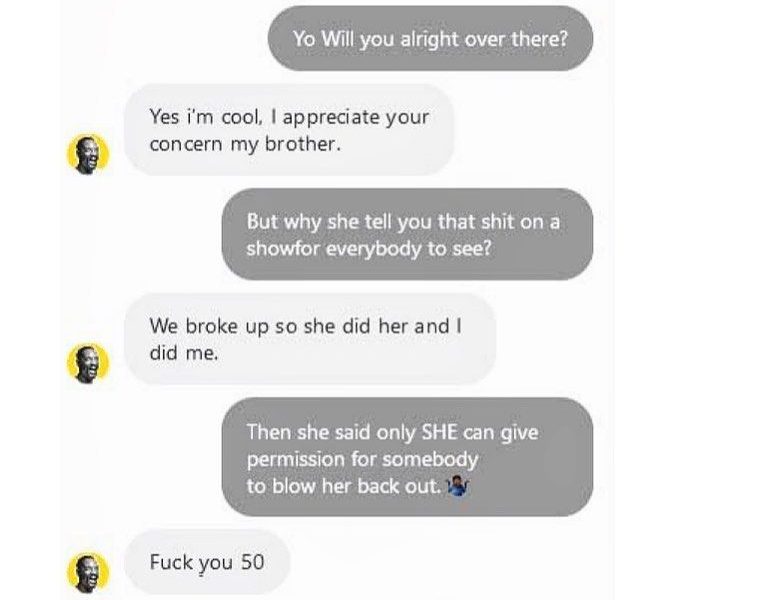 Over the past week and a half, one of the biggest stories in the world of Hollywood was Jada Pinkett Smith’s affair with Will. Years have passed since rumors circulated surrounding their alleged open relationship. August Alsina claimed he had a relationship with Jada, though it was only on the latest episode of Red Table Talk that the Smiths confirmed.

Of course, it didn’t take long for the memes to start rolling in. 50 Cent, specifically, went in on Will Smith with a slew of memes on his Instagram page. Of course, many of the jokes targetted the reference to Jada’s “entanglement.” Fif shared what appeared to be a fake DM of him reaching out to Will Smith. “Fuck you 50,” the apparent last message from Will reads.

In the midst of the August Alsina drama that’s ensued over the past week, many brought up Tupac’s name who, of course, was incredibly close to Jada. Fif shared a hilarious edit from The Fresh Prince Of Bel-Air when Will’s dad leaves that invokes ‘Pac’s name.

“This ain’t five years ago, you know? Ain’t like I’ma be sitting up every night asking my wife, ‘when’s August comin’ home?’ Who needs ’em,” a voiceover says before flaming his filmography. “I don’t need her then, I don’t need her now. You know what, Uncle Phil. I’m gonna do Bad Boys 4 without her. I’m gonna do I Am Legendary without her. I’mma do a CD. I’mma do a whole bunch of songs. It’d be the best CD there ever was. And I sure as hell don’t need her for that. All she gonna do is throw Tupac in my face in front of my kids!”

Check out the slew of memes from Fif below.