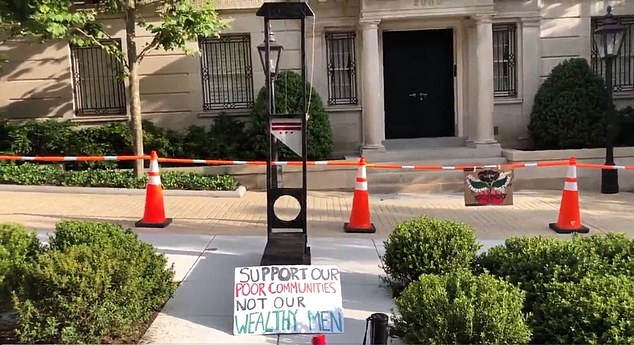 If you thought Amazon mega-mogul, Jeff Bezos was untouchable, then think again because apparently a guillotine was placed outside of his DC home by anti-Amazon protesters.

Numerous videos began circulating all over social media showing the apparatus that was used for beheading executions in the French Revolution alongside a sign that read: “Support our poor communities. Not our wealthy men,” by one of Bezos’ homes.

Jeff doesn’t primarily reside at the DC location and it wasn’t clear if he was there during the protests, but the protests were seemingly organized by a man called Chris Smalls, who Amazon says was fired for “violating social distancing guidelines and putting the safety of others at risk.”

Apparently, it all started after a flyer began to circulate online, titled “Abolish the present. Reconstruct our future. The flyer gave out the address of his DC home and the date and time of the event on Sunday.

“Amazon works directly with police to surveil us, stoking racist fears in the name of profit. Doubling down on their union-busting and mistreatment of workers, Amazon fired and racially slandered labor organizer Chris Smalls,” the message reportedly claimed. “Join us to tell Jeff Bezos enough is enough!”

“END THE ABUSE AND PROFITEERING. ABOLISH THE POLICE, THE PRISONS, AND AMAZON.”

Bezos spends the majority of his time in NYC.