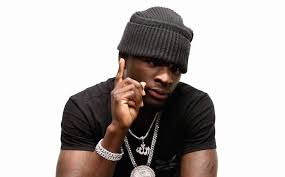 RALO WARNS TO KEEP HIM OUT OF PAINTBALL WARS….READ MORE

Public paintball battles seem to be coming back to popularity thanks to a couple of popping rap stars, but there is one particular artist who – from one ATL goon to another – has requested that he be left out of all the shenanigans.

In a live stream that has been circulating social media, Ralo puts out a message that the streets might want to heed for the sake of preventing the potential for problems. “Don’t come by my apartment shooting no paintball gun. And when Y’all see a yellow Lamborghini (the SV on the side) or the Hellcat (yellow, with the Hellcat on the side), or the Corvette with the Z06 on the side; if Y’all see any one of those cars, please do not shoot no f**king paint at my car,” the Dream Last Night rapper said.

“I don’t wanna play those type of games, bro,” he’d continue on to say, warning that regardless of how cool he might be with any given person, there would be some ramifications that impact their relationship should a so-called friend go out of their way to disrespect his property. “Don’t shoot no f**king paintball at my f**king car, man. I’m telling you, man, there’s gonna be some s**t behind it. I don’t give a f**k who it is,” he said.

Paintballing is lit again, and it is perhaps thanks to 21 Savage and YBN Almighty Jay, who recently called one another out to get a showdown going. Within days of the challenge going up videos began to surface of folks having fun and spraying each other’s rides up in Atlanta.

FIND OUT THE DETAILS BEHIND THE TRISTAN THOMPSON DRAMA!