{STREETZ MORNING TAKEOVER} SOULJA BOY IN TROUBLE WITH THE FEDS? 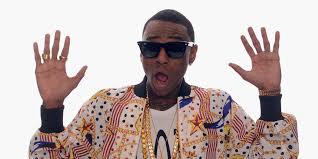 SOULJA TAKES TO TWITTER TO PUBLICLY ANNOUNCE HIS PLANS FOR MURDER

Just a week after it was reported he had been sued for threatening to kill a man, the 26-year-old rapper went on a Twitter rant making similar threats Sunday. In a series of now-deleted tweets, Soulja wrote: “I got 100k cash right now who in Chicago wanna kill this Ni**a for me,” and “He gon be dead before 2017. We sliding. I got 100k on his head.”’

Twitter responded by tagging the @FBI in his the tweets, to which Soulja responded by promptly deleting them.

Making your plans to kill a man public? Not one of your best moves, Soulja.