[THE BREAKFAST CLUB] GUCCI MANE & KEYSHIA KA’OIR MAY BE GETTING A REALITY SHOW??! 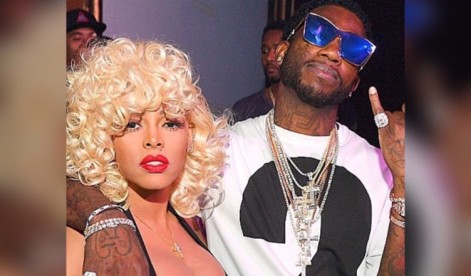 KEYSHIA KA’OIR & GUCCI MANE COULD POSSIBLY BE GETTING THEIR OWN REALITY TV SHOW… YOU KNOW STREETZ HAS THE JUICE!!!

Apparently rumors have been surfacing this past week about Guwop & his girlfriend Keshia Ka’oir getting their own reality TV show on the Oxygen Network .

The show is rumored to be based upon Gucci’s post-prison life, recording new music, and his everyday life with girlfriend Keshia Ka’oir. Reportedly Gucci and the network are negotiating the paperwork right now, and how much he’ll be paid. He will probably also have to figure out how to work around his probation restrictions. This show hasn’t been confirmed yet, but Oxygen star Judi Jackson (of Bad Girls Club) might have spoke to soon early last week in a now deleted Instagram post, Judi congratulated Gucci on his new reality show.

“Never will forget my first Gucci concert. #OnStage. He’s such a great artist!” she captioned the pic. “That man is not a clone! So happy he has got his life together and has A BEAUTIFUL woman by his side keeping him together. Excited about his new reality show on @Oxygen! I believe reality tv will not saturate his music. He’s a real rapper! Trapper! The plastic world ain’t gonna shake him! I love his music and real Gucci fans know he ain’t a clone. Stfu! Fake a***s! Turn up! For the better! #Salute I’m a fan! And hi twists! Chitown
Tags: #STREETZ945atl#TheBreakfastClubATLatlantabearscatsCelebrity Couplesentertainmentgucci maneHip HopinstagrammusicNewsOxygenrapperStreetz945The Breakfast ClubThe Juice LiveTheJuice

HE REALLY HAD SOMETHING TO SAY!